Posted by admin
in IT AMC Dubai

In today’s world, where numerous organizations across the landscape have been predominantly using various gadgets at their workplaces be it the workstations, servers, laptops, printers, projectors to name a few. Due to their prolonged usages, 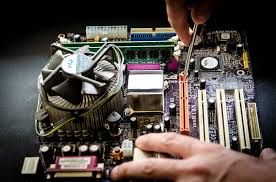 As an analogy, it has been observed that the gadgets mentioned above are prone to certain malfunctions and these malfunctions require an expert attention to resolve the malfunction and finally enabling the gadget to function for a prolonged time period.

The annual maintenance contract or the AMC has been aimed to constantly help the customers to maintain their workstations, servers, laptops, printers, projectors efficiently for an extended period of time as mentioned in the contract outlines.

How AMC benefits the Server side support?

Computer servers are considered as one of the major repository for database which eventually gets accumulated from the various workstations connected to it through the local area network or the (LAN). Servers are quite prone to certain redundancy and which requires the continued monitoring of the same.

Server maintenance also involves the constant update of certain software patches and also the firewall network security software so that the server constantly remains safe and hence the security prevails to the entire workstations that are being connected across.

The AMC component does involve the server maintenance activity which involves the reviewing server performance at regular intervals and the most pivotal component also involves taking up the backup of the database for the safety of the crucial data.

The server side support rendered by the service provider as a core component of AMC often involves the engineers to be constantly present at the client-side for continual monitoring of the same.

However, There Are Certain Initiatives For The Server Side Support Includes:

The Role Of Amc Under The Cloud Computing Regime

In fact in the recent trend, the structure of AMC and the modality of the system maintenance has been sporadically changed, with the cloud computing platform taking up the center-stage among the organization; the pattern of server protection also has changed.

The AMC under the cloud surveillance has been more towards the overall monitoring of the bandwidth that is required to sustain a server.

Jurisdiction Of Amc Does Involve The Plethora Of Services Such As:

Since the entire workstations and server handles certain mission critical tasks, the problems that arise at the workstation and server levels are handled at a faster response time and with quick resolution so that the work does not get hampered.

AMC service providing company constantly focus on the unlimited remote desktop support as it is becomes quite convenient for the users to resolve certain miniscule issues.

TheIT AMC Dubai has been an crucial exercise in itself which involves in the server maintenance and its subsequent administration. VRS Technologieshave been persistently providing the AMC for servers, workstations and other peripheral related support initiatives and if you are in the lookout for a technical player who could be able to completely manage the systems in the premises, please approach us and call us at 00971555182748 and further visit our official site at www.vrscomputers.com

For more information about IT AMC Services visit below links:

AMC services serves as the indispensable component for corporate

VRS Computers offers amc for servers like never before